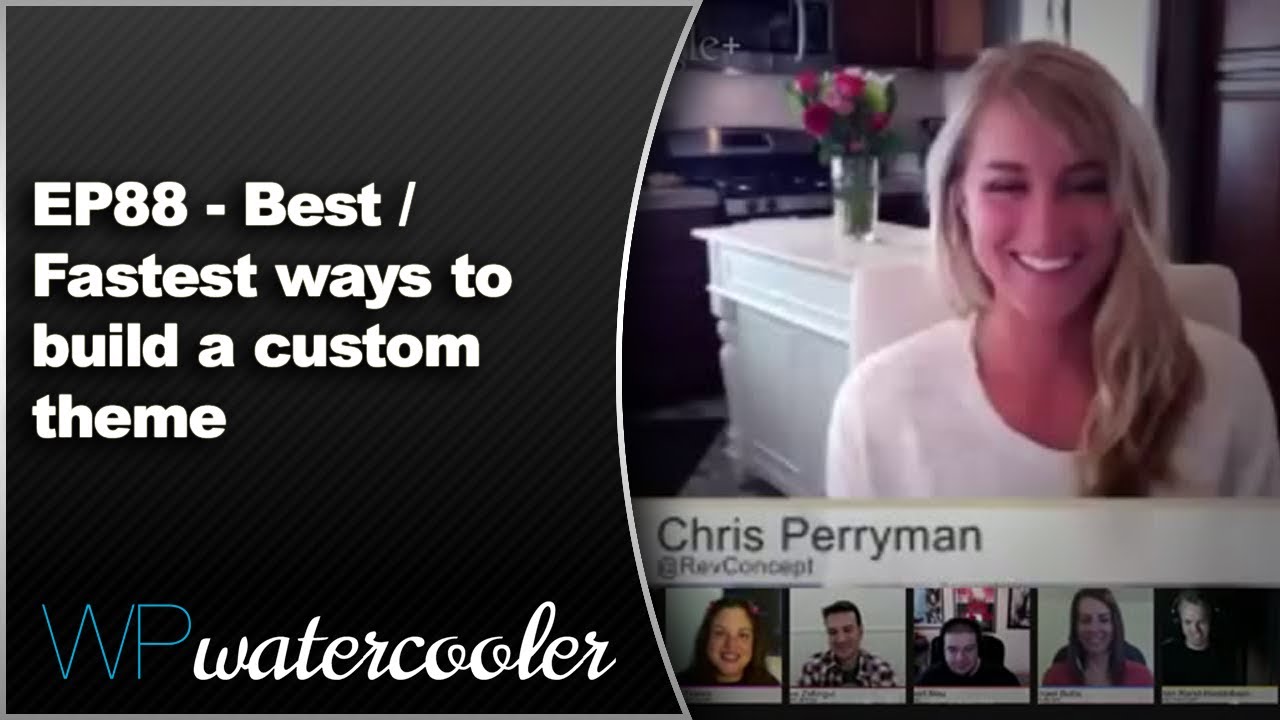 On this episode of WPwatercooler we will be discussing the Best / Fastest ways to build a custom theme. Show airs May 19th at 11am PDT / 2pm EDT / 7PM UTC Links from this episode:

Some of you guys are real WordPress snobs! Seriously, why in the world would you re-invent the wheel EVERYTIME you begin a site. Ridiculousness. At the end of the project, the client just wants a great, functional website. They really don’t give a rat’s ass about how it is done and whether you did it from scratch. Geez, get down off your high horses and start relating to the common WordPress wrangler.﻿ I am with Chris on this–100%.

Hi. Could you guys please devote a session to best practices when using a subscription plugin on a client site.

It seems like a lot of premium plugins and technologies (a la Genesis Extender) are going with a yearly subscription model. How do I, as a web designer manage that annual payment if we no longer manage the web site. AND if we use our perpetual license on a client site, what happens if we part ways? Do I disconnect things like BackupBuddy? I think this would make for an excellent talk.

Having been a professional costume designer who has work from creating the design to actualizing the design in all phases. Whether, I start with a purchased pattern and alter it or start with a sloper and adjust it or if I draft the pattern from scratch when I am done I have created a one of a kind custom costume pattern. Now that I design and develop websites it seems pretty much the same to me. The end result is a custom tailored theme for my client that serves their needs whether I start with a purchased theme or a starter (sloper) theme and alter it or code the theme from the bottom up.

The difference comes down to cost, and time. Being able to use your client’s budget to give them the best website is choosing the appropriate method. Building a custom corset from the bottom up or purchasing a bustier and decorating it is all about budget – the same applies to websites.

Loved the discussion, it was very thought provoking and informative.

I’m a little late to the party, but this episode ended up being the first episode I was introduced to and I found it interesting.

It’s obvious where drawing the that line on what is a custom or bespoke WP theme is a very subjective topic and I sensed a certain amount of disdain from some individuals at the idea of using an existing theme – whether paid or free – and then “configuring” or “customizing” it through child themes or Additional CSS.

Where to draw that line I think depends upon the customer, but I think that approaching WordPress web design from the concept that true development is only building a theme from scratch overlooks the huge power of technology when it comes to deploying duplications of content. We can literally copy and paste entire articles that would have taken hours upon hours to write from scratch. The reality is, the hamburger of a website is typically always the same – header, footer, and body between. There’s a reason major car manufacturers often use the same chassis for multiple models (even across various makes), because it’s a common component of every vehicle and is the perfect starting point to build from. Every website might use a slightly different layout. Maybe a header has a top bar or a centered logo. Perhaps the body has a sidebar or stretched width. It’s possible a footer might have 3 widget boxes instead of 4, but in general when you visit a website you sort of expect to find the typical parts in their typical places: header, navigation, article, sidebar, footer, copyright.

So I think failing to take an existing theme that matches nearly everything a customer is requesting and configuring it or customizing it to their needs is a huge misstep in the wrong direction. Looking down upon that is sort of hypocritical given WordPress itself falls under that same vein of being this really great starting point to build from. Fact of the matter is, if we wanted to build a customer an absolutely bespoke site that is absolutely custom and perfectly tailored to their exact needs, we wouldn’t use WordPress at all – the HTML, CSS, and JavaScript would be coded from the ground up to match what they need on the front end and back end exactly to their specs with nothing less and nothing more. That’s as optimized as you can possibly get and erases any bloat a CMS generates, but what we’ve realized as WordPress aficionados is that WordPress provides this really powerful starting point to build from that’s a great trade off for saving lots of time and providing the end user a standardized system to work with. Importing a basic theme that someone else has built is really no different. After all that’s really these what all these minimalistic, stripped down themes created for developers to build from are all about, but if the final product ends up looking (and performing) nearly identically to a theme that’s in the WordPress repository, you’ve worked harder and not smarter. Not to mention, unless you plan on maintaining the theme you built in some manner, it’s likely not going to get the same attention even a freemium theme receives via the author with every core update of WordPress. That quickly become a security concern and compatibility concern depending upon how the theme was built and what the theme includes.

I guess in my opinion, “hating” (not there was any particular hateful discussion here) on developers that leverage existing themes as a platform to build from to save time and money is sort of hating on the idea of WordPress and plugins as a whole whose technical economy revolves around the idea of building off of other people’s open source (or paid) projects to create exactly what is needed in a relatively easy way. And it’s certainly much quicker compared to having that project built with the developer starting by typing in .