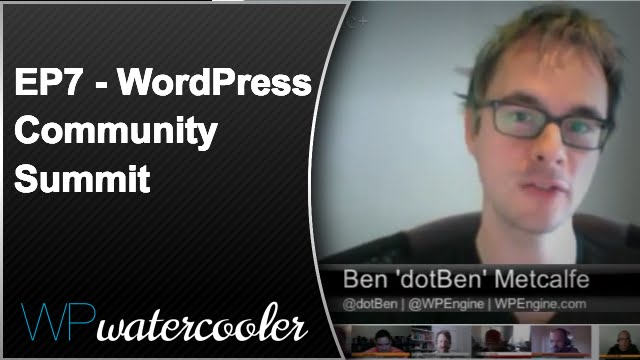 Se Reed mentions that WordPress Community Summit is the Bohemian Grove of WordPress.

Dre opens up about WordPress Community Summit in Georgia at the chapel Miley Cyrus built for her film.

Dre describes the scene at WordPress Community Summit.  Open sessions, round table sessions…topic at each table than strong points, bad issues that there having, how to make it better, creating actionable items

Chris Lema asks about where the attendees are coming from Core are they well known.

Brandon Dove got a lot of info for running WordCamps, meeting up with other WC organizers.

Dre mentions ‘The Foundation and Transparency Around It’.
https://make.wordpress.org/summit/2012/10/29/summary-of-morning-discussions/

Dre goes more into ‘The Foundation and Transparency Around It’ .

Jon Brown asks what were the key points that came about WC topic?

Brandon shares what is happening with the Foundation and the money being brought in.

Se asks if there were any answers as to where the money is going.

Discussion breaks out about video and timeliness of seeing them uploaded on WordPress.tv

Dre mentions Summit topics that were covered during the event; such as, Who’s Really Running the Foundation?

Dre continues with the answers and what will be happen moving forward to working out solutions.

Brandon mentions that there’s a big opening up at WordPress; WordCamp sites will be more versatile.

Mentioned sharing information about plugins security with hosting companies and the repository.

Jason Tucker asks about how that might go forward.

Ben mentions that there is already a group that discusses security and what actions that will happen going forward to deal with plugin issues and taking it to the next level.

Jason wonders if the plugin developer will be contacted.

Ben mentions that ‘Matt’ suggest that the hosts should review the plugins.

Chris asks how developers are going to be approached about poor performing plugins.

Ben provides a thorough response to how developers will be brought in to the discussion when his/her plugin has performance issues.

Dre gives Jane Well props for putting together the Summit.

Describes it as a huge win.

Brandon mentions what is going to happen noncore code contributions and recognition that will start to occur.

Se mentions that people will be listening to the developers on the frontline.

Chris asks “What was the most surprising thing to you?”

Ben chimes in updates;  the big discussion that he took place in Automatic updates and where we are going with that and sites breaking due to updates.

Ben mentioned upcoming Summit next year and how action points will be handled.

Dre mentioned the importance of acting on the action points and mentioned that for plugin reviews require more than choosing a star rating; going forward leave a review describing the plugin.

I like the idea of having a video chat via Hangouts. But I feel like the conversation is among those in the Hangout. I feel that you forget that when it is “Live” that you have an audience to talk to. Thanks!

@DennisJSmith thanks for you comment. Yeah, in 30 minutes of show time it’s hard to be able to interact with all the people on the show. Adding in an extra element like interacting with people out side of the show would be very difficult and I’m not sure it would add much if not hurt the show in attempting to do so.

@DennisJSmith this is just my two cents, but I think the conversation IS between those in the hangout. that is part of the whole makeup of the show … these are conversations we were all already having on the backchannels … now we’re recording them and sharing them with you so y’all get to listen in on our watercooler chat!

@DennisJSmith I have to agree with Jason and Se. But I also do agree that could be a great topic for a show…like a WordPress Q & A.