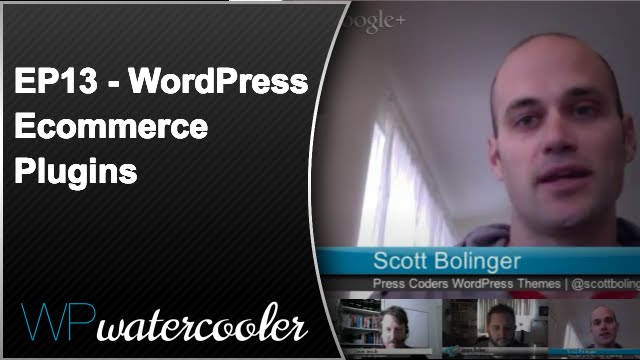 Sé did a 4 hour conference on Shopp, she had previous issues with it and learned quite a bit from this talk. Her fave thing is when it makes cart pages it makes virtual pages not custom post types.

Scott says that Shopp is complicated and the 4 hour webinar would help with learning it.

Se talks about the method of teaching Shopp that they did in the webinar.

Scott and his company likes Woocommerce and how simple it is to use.

Se thinks that Woo, WooCommerce and WooThemes is a bit bloaty.

Chris has gone years not receiving an emailed from Shopp, he received an email from them and he thinks they are ramping up on their marketing.

Chris also mentioned how Woo has made the theming cleaner and most of their options are unchecked to save you time in turning on just what you need.

Chris mentions that caching that is agressive can mess with things, Scott mentions that he had recent experience with this and his host WP Engine stepped in and helped resolve these issues.

Jason asked about the simplicity or complexity of the backend for the site owner.

Chris says Ecommerce is complicated and its a challenge to make it simple.

Sé talks about what she does at the Small Business Development Center and dealing with Paypal.

Wes brings up YAK and how light weight the plugin is. This uses posts and pages and is very easy for his customers to work with.

Sé says that Shopp is using CPT and also using an importer to import and export content.

Sé says “it depends” is the go to answer when it comes to E-Commerce and what solution to use.

Wes brings up magento, we all gasp.

Jason brings up using Gravity Forms as a way to create a small and simple shopping cart.

Dave says that doing a Gravity Forms cart would work well for small but the more complicated this will fall apart fast.

Dave rewrote the import tool to import 600 items into Shopp from excel.

Chris talks about an importer for WooCommerce that deals with many forms and formats of data.

Sé talks about Winter time in the LBC

Scott talks about Extensions on Woocommerce and how expensive it can be.

Sé mentions behemoth when it comes to Woocommerce, Chris defends Woocommerce saying she’s wrong about that. Sé says she was talking about the back end of the site not the front end.

Scott talks about how simple it is to add the template tags into your existing templates to work with WooCommerce.

Jason mentions WP E-Commerce and everyone freaks out. Jason has used it in the past and didn’t have any problems with it. Sé talks about how hard it is to move out of some systems.

Wes says that WP E-Commerce is very inconsistent and just didn’t work back when he used it a few years ago.

Dave says that when he used it last there were many bugs and issues with the code.

Dave would rather have a good user experience and use something that works well for him and his customers.

Sé wants the cart to work as well as WordPress itself does.